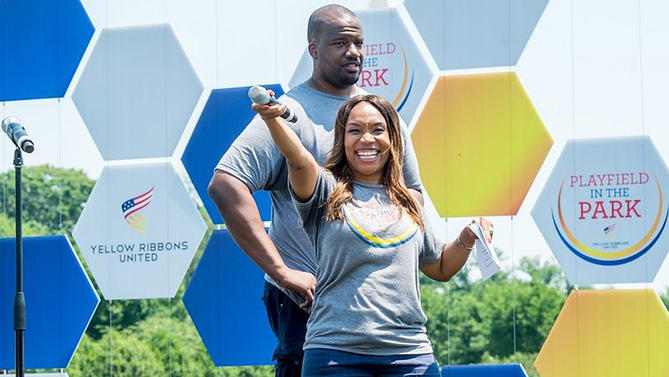 WASHINGTON, D.C. -- The smiles were as bright as the sun that was baking the National Mall, and the high fives and handshakes were hearty and spirited as busloads of children and their mentors arrived for a fun-filled day of activities. It was Memorial Day weekend, when the Mall is always bustling with activities, but this was a particularly special group of tourists. They were in town for the most tragic of reasons, and many of their hosts tended to stand out in a crowd.

The children, spanning from pre-school to high school, were in Washington as part the TAPS program (Tragedy Assistance Program for Survivors), which provides resources and support to families who have lost a loved one serving our country in the military. Memorial Day weekend is particularly difficult for these youngsters, so every spring TAPS holds "Good Grief" camps around the country which provide counseling, mentoring and in this case, hopefully, an escape from the pain of losing a parent or sibling to combat.

Active military members serve as hands-on mentors to the kids, and one of the highlights of this weekend in Washington has become the "Playfield In The Park" event, hosted by Derrick Dockery, a former stalwart on the Washington Redskins offensive line, and his wife, Emma.

The Dockerys have made a habit out of giving back to others, and years ago they hatched the idea to try to create a charity to further unify those Americans who have not experienced this profound loss with those who have. They wanted to become conduits to steering resources and allocations towards these causes, and design grassroots means to work with those directly impacted by service casualties after Emma's brother, Sgt. David Williams, died while serving in Afghanistan in 2012.

So they formed Yellow Ribbons United, and for the past three years they have partnered with TAPS and its founder, Bonnie Carroll, on Playfield In the Park as part of a full agenda of weekend events. They've called on their resources and diligently worked in the community to cultivate sponsors and relationships to make this spring outing a haven for the youngsters. Approximately 600 kids took part in Playfield In The Park this past Saturday, and the Dockerys also host an annual Back To School event for TAPS children and an annual Christmas event as well.

"We wanted to find a way to reach out to others and try to help after my brother-in-law passed away," Dockery said as his event was winding down over the weekend. "It's a great way to keep his memory alive and try to give these kids something fun to do at a time that's very difficult for them."

There was a strong NFL presence at the event this year, with current and former players taking time out of their holiday weekend to immerse themselves in their surroundings. Redskins Hall of Fame cornerback Darrell Green was a jitterbug, running all over the field playing catch and tag with children with a boundless energy. Former receiver and return ace Antwaan Randle El had arranged a slew of blocking pads and cones into an enticing maze of drills for the kids to navigate off behind the main stage. 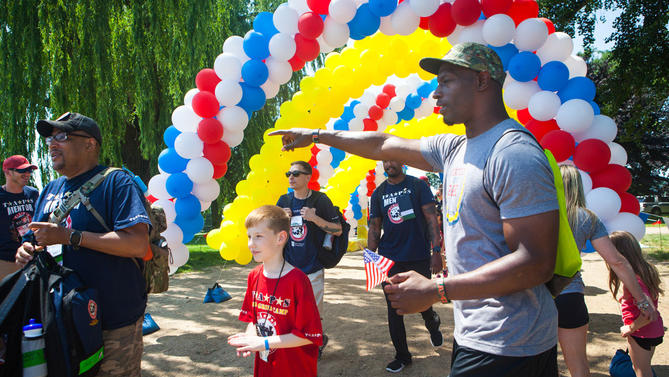 Former Redskins linebacker Ken Harvey, who now writes for the Washington Post, was drenched in sweat after two hours of being a human tackling dummy. One beaming child after another put their best juke on the former Super Bowl winner in drills set up in the NFL Play 60 area. Ex-Skins linebacker Rocky McIntosh was bounding from one play area to the next -- there was baseball, soccer and basketball drills set up around the field along with a half dozen varieties of bouncy houses and inflated athletic zones. Former Super Bowl-winning tight end Doc Walker oversaw some drills. Bills linebacker Lorenzo Alexander, who has done extensive outreach throughout his career and was a community staple during his time in Washington, took part as well, along with several current Redskins players.

"It can be a busy weekend for a lot of people and a lot of the current players are out of town," said Dockery, who played for the Bills and Cowboys besides his two stints with the Redskins, "but there are so many guys who live in this area -- former and current players -- who are eager to come out and play with these kids. We've got a great group of guys in this community here, and really around the league."

The Skins contingent was impossible to miss, many still bursting out of their t-shirts and the beating sun no match for their enthusiasm to run around with the kids. Everyone arrived around 11:30 a.m., with the event kicking off at noon. That's when the parade of buses began coming down Independence Avenue. The current and former players, along with a large contingent of other volunteers and sponsors, formed a welcoming gauntlet leading up to a balloon-filled entryway to the park, clapping feverishly as the children approached.

The kids soaked it all up. For a few hours they were carefree on a weekend that by its very nature amplifies their loss. They interacted easily and playfully with the NFL guys and ran from one activity to the next.

But as each bus pulled up at the entrance and as each line formed to participate in a drill, it was impossible not to be heartbroken by the sheer volume of children impacted by the loss of a loved one, congregated in just this one park along the Potomac. And it was impossible not to think of the exponentially greater number of those dealing with that very same loss, likely without this support group, around the country as well.

The welcoming line was all high-fives, with some youngsters sprinting through with both arms extended. Others were a bit more sheepish with the handshakes. Everyone tried to extend as positive of a welcoming vibe as possible and children and their mentors stopped for photos with the players.

There were activity areas spread out across the field, from American Doll and LEGO workshops to arts and crafts (personally styling shirts and trucker hats), free food and ice cream tents, a large stage for dance contests, the Play 60 areas and tents for the other Washington sports teams and some media outlets. Most important, there was ample space for the children to simply run around and be kids. 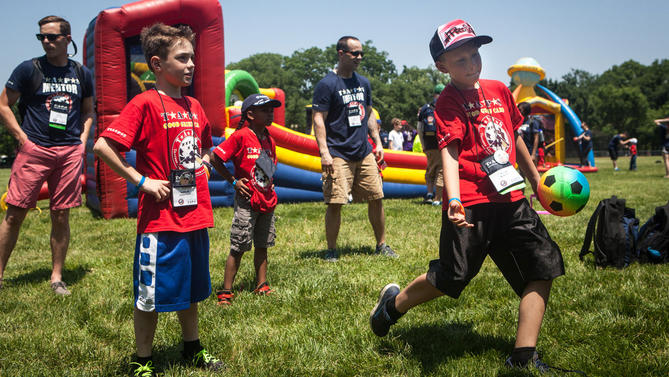 After opening remarks from some military officials, stressing how awestruck they are by the bravery these kids display, there was a dazzling display from the Air Force Honor Guard, twirling riffles with bayonets over their heads like they were merely tossing a football.

Green, who was fully engaged and clearly moved by the opportunity to work with these youngsters, gave a stirring address to the throng. "You are our true heroes," he told the kids, while also urging them to bring their strength and ideals back to their schools and communities. Some of the loudest ovations came when the Dockerys took the stage, especially Emma. Sponsors and prospective sponsors seemed to flock to her through the afternoon, and this is clearly a labor of love for this family. 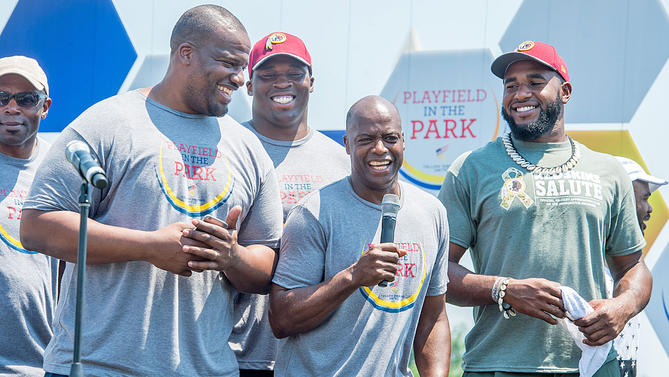 "She is most definitely the star of this family," Derrick Dockery said. "None of this would be possible without her."

Of course, the NFL outpouring was a testament to the man that Dockery is, and there was no doubt that so many current and former players were there simply because the former guard merely asked. Dockery, an All American at Texas, was a beloved figure even as a youngster by largely veteran Redskins teams, smart and funny and bright and quickly grasping the locker room hierarchy and inter-dynamics.

He was a joy to cover during my days at the Washington Post, passionate and insightful and driven by much beyond football. He has become something of a bright star on Capitol Hill since retiring in 2012 after a 10-year career, drawn to politics and lobbying as a means to help others. He has expanded his education by earning an MBA from George Mason University.

He first ventured to The Hill in 2012 as an intern for Speaker of the House Paul Ryan and in 2015 he went to work for Rep. Jason Chaffetz (R-Utah) before being hired by Ryan this year to help build coalitions with state and local governments and the business community. It's a natural fit for Dockery, who despite his unique post-football career path and the heavy media presence within the political arena, has maintained a decidedly low-key persona, focusing instead on his work and the causes he cares about most deeply.

This, clearly, is one of them.

"I think there is a real disconnect between what we would call military families and civilians when it comes to these casualties," Dockery said. "In reality, something like 1 percent of the population has been called to serve and make this sacrifice, and obviously the impact of that on those families is devastating but it's a small percentage of the population who are really experiencing it." 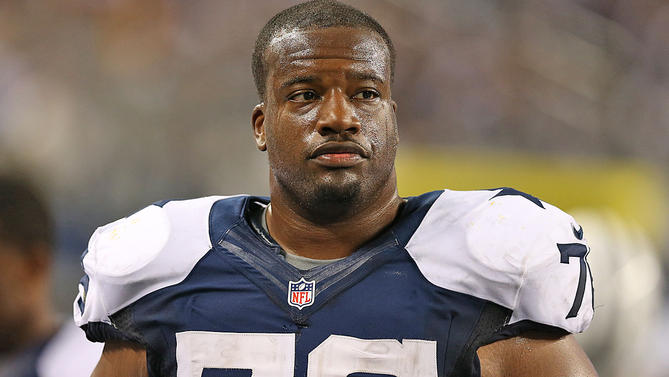 Events like these that the Dockerys host are a small but tangible way of letting these families know they are not forgotten. The work being done by TAPS is exhaustive -- the four-day Good Grief weekend includes seminars, workshops, museum visits and tours, ballgames, art therapy, even primal screams -- looking for thorough and exhaustive means to help these families cope and to provide resources to take with them when camp is over. You can learn much more at www.taps.org.

Yellow Ribbons United continues to seek ways to close the gap between military service and civilian responsibility by encouraging Americans to express their appreciation for those who serve through civic and social action and the pursuit for further support and sponsors is endless. Please go to www.yellowribbonsunited.orgto learn more about how to support the cause.

What began for Dockery as a passion while still playing has now become a family vocation, and one that he hopes continues to grow. The Redskins lineman would volunteer regularly at Walter Reed Hospital, seeing first-hand some of the horrors that so many vets experienced when they returned back home.

And with the allegiances and alliances Dockery, 35, is forming in politics and the business community, I suspect many more will become aware of his work in this second stage of his life than will recall what he did for 10 years in the NFL. Suffice to say, Dockery hopes that is in fact the case, and judging by all that I saw over the weekend, he is clearly already well on his way.